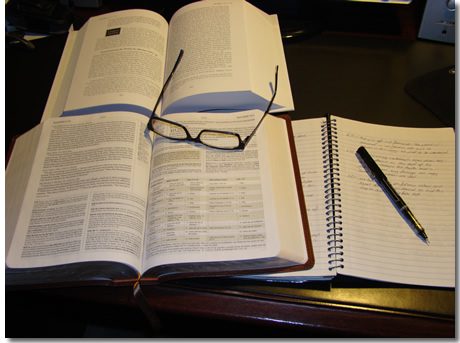 Preaching is both an art and a science. There are some things that can be taught in a seminary and some things that must be given by God and developed by the preacher. With that said, there is some place for creativity in the sermon, although it must always be subservient to the biblical text and cannot drive the sermon.

When an expositor has done his homework (deriving the meaning of the text from grammatical, historical and contextual studies in the exegetical process) he will more easily be able to construct an exegetical outline of the text—one in which the biblical language and “dress” are still present and the main idea of the chosen text is firmly established. This “main idea” is not flexible—it is the idea that the original writer meant to convey when he wrote to his original audience.

This is important to get right before jumping ahead to a preaching outline and application. If this original meaning is not established and these important steps are skipped over, then anyone can make the Bible say anything that they want. But Scripture is clear that this is not the way one is to treat the biblical text:

Knowing this first of all, that no prophecy of Scripture comes from someone’s own interpretation. For no prophecy was ever produced by the will of man, but men spoke from God as they were carried along by the Holy Spirit. (2Pet 1:20-21)

Do your best to present yourself to God as one approved, a worker who has no need to be ashamed, rightly handling the word of truth. (2Tim 2:15)

The Apostle Peter knew that he would soon be dying for the faith (2Pet 1:14) and that there were some claiming to have extra-special experiences and secret teachings that, in their opinion, should override the Apostles’ teaching (2Pet 1:16). Peter had experienced the Transfiguration of Christ, a clear manifestation of heavenly glory, complete with the double Apostolic witness of James and John in the presence of Jesus (v. 18). This experience, Peter wrote, was not as valuable or reliable as the very Word of God revealed (v. 19).

And Paul, who is also facing his own martyrdom, wrote to his young protégé Timothy from a Roman prison (2Tim 4:6-7) is not concerned for his own life, but rather that Timothy is faithful to “preach the Word” faithfully (2Tim 4:1-2) and accurately.

Yet, some pastors handle to Word so loosely that they teach the sheep in their congregation to do the same—handling it haphazardly, with little regard for what God meant when he wrote his Word.

The following is an example of an example of such careless abuse of the Word of God from a pastor who should know better, but apparently does not. This excerpt is from a local church’s website describing the senior pastor’s “revelation” from God including “God’s own words.”

One night, God ministered to Steve from Isaiah 54:2–4. Steve read it like this, with God speaking His words right into his heart.

“Enlarge the place of your tent”: It’s time to move to a bigger place so that I may do a bigger work.

“And let them stretch out the curtains”: Steve, I will have other people come by your side to co-labor.

“And strengthen your stakes”: Steve, I am going to do a deeper work.

“Do not fear, for you will not be ashamed!”

The property the church began looking at would fulfill all that God had promised to Steve. [1]

Notice that in its original context, the Scriptures are addressed to God’s people, specifically future Israel. If a person were to stop and look at the Isa. 54:1, the prophet Isaiah calls Israel “barren one” and verse 7 says that for a brief moment, the Lord had deserted her.  Would this pastor and church say that they had been barren and deserted by God previously, but now they were turning from their wicked rebellion and returning to God so that he would bless them? I do not think so, but even if they would say that this was true, it was not written to them for a private interpretation such as was given by this pastor, complete with references to the 110 freeway. Such fanciful interpretations are reckless.

This is why the whole sermon must be driven by the text and not the other way around where the pastor comes to the text with his own point of view and finds a text to fit his own preconceived ideas. To do so is to rape the biblical text.

2 thoughts on “What is Expository Preaching? pt. 5: Abusing the Bible in Preaching”

One advantage of putting together the IFCA Convention is that I get to hang out with wonderful brothers in Christ, like Drs. Michael Vlach, Tommy Ice, and Larry Pettegrew. These IFCA International members are heavyweight theologians!
Another bolt captured over Lincoln, NE.
A beautiful lightning storm in downtown Lincoln, NE. #nofilter