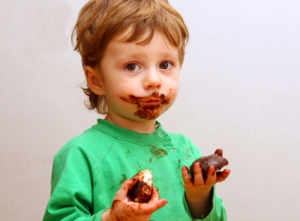 When I was a small boy, my brother and I knew that my mom had a stash of chocolate and we made it our mission to get it. We took a chair and used it to get up on the counter, and then we stood up on the counter and climbed the shelves to the very top shelf where it was hidden. We took it down and unleashed the chocolate from its wax paper wrapper and broke off a wedge from the circular shaped chocolate bar, and then we took a big bite. It was awful. It was unsweetened baking chocolate that is never meant to be consumed in that form.

Our other attempt to score chocolate was also a horrible failure. It was at an early age that I learned what Ex-Lax is. You remember Ex-Lax, the chocolate looking laxative that was wrapped in foil? I know I’ll never forget it! Temptation strikes all of us, no matter our age!

In Matthew 4, Satan took Jesus to Jerusalem and set him on the pinnacle of the temple, possibly the high southeastern corner called Solomon’s Porch. This corner dropped over 400 feet into the Kidron valley below. It was from this precipice that Satan pitched his next temptation to Jesus. Matthew 4:6 says,

“and [Satan] said to him, “If you are the Son of God, throw yourself down, for it is written, “‘He will command his angels concerning you,’ and “‘On their hands they will bear you up, lest you strike your foot against a stone.’”

Along with the temptation, Satan quoted Scriptures to back up what might seem to be an otherwise crazy suggestion. The two quotations that Satan used were from the Old Testament, from Psalm 91:11-12, a psalm that speaks of God as the protector and salvation of those who trust in him when they are in danger. So, what Satan is saying is basically true.  But what was his motive? His attack here was two-fold: 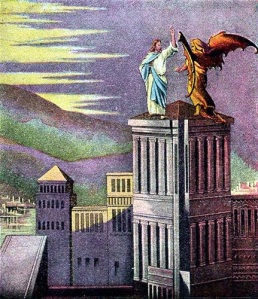 Whereas in the first temptation the doubt was directed as God’s provision, here the doubt is pointed at God’s Word. It is as if Satan were saying, “Oh, so you are quoting Scriptures are you? Do you truly believe them? I have read them too. Psalm 91 says that if you are the Son of God, he will protect you so that you won’t even stub your toe if you were to jump from here. Do you believe it? Then, throw yourself down from here and prove it.”

Jesus replied to Satan’s temptation without negating the Scriptures. Instead he clarified what they mean. You see, just because someone uses the Bible doesn’t mean they are telling the truth. There are a lot of thieves on TV who use the Bible as a means to fulfill their own greed by taking advantage of unwary followers. There are also a lot of false teachers who draw attention to themselves by using the Bible as a tool for their wicked doctrines, even teaching things that the Bible clearly says are wrong as if God has sanctioned them.

You don’t believe me? Satan used the Bible. Why wouldn’t his children? That doesn’t mean that we should distrust all Bible teachers. But we need to realize that we are responsible to dig into the truth to understand it ourselves. The Bible has only one interpretation, not many. We can apply it in a lot of different ways, but it has only one meaning—what the Author intended it to mean.

Consider this example sentence given by someone, “MY MOTHER LIKES CLIMBING VINES.” Now we can’t say that this means, “MY FATHER IS AN AUTO MECHANIC.” We can’t just arbitrarily replace “father” with “mother” or “likes” with “is” or “climbing vines” with “auto mechanic.” If words have any meaning (and they do, or this blog post and everything on the internet mean nothing), we would be foolish to say, “OH, THAT’S JUST YOUR INTERPRETATION.” But there is still a problem here. Does this sentence, MY MOTHER LIKES CLIMBING VINES mean that my mother enjoys climbing up vines like Tarzan, or my mother finds pleasure in the types of vines that climb a trellis? The only way to find out, is to know the context—Is she in the garden department at Home Depot, or is she wearing a leopard skin suit and hanging from a rope?

Jesus answered Satan by using the biblical principle that is called the Analogy of Faith. This principle teaches that Scripture interprets Scripture. And because Scripture never contradicts itself, it will always agree with itself. The Bible is not self-contradictory, since it is from God and God is not a God of confusion, nor can he err.

Notice Jesus’ words in his reply to Satan in Matthew 4:7, “Jesus said to him, “Again it is written, ‘You shall not put the Lord your God to the test.’”When Jesus starts by saying, “Again” or “On the other hand” He is clarifying Satan’s twisted interpretation of Scripture with a clear principle taught elsewhere in Scripture. The fact that you shall not put the Lord to the test surely means that Satan’s interpretation was in error.

Here we can see the second phase of the attack. (Matthew 4:7, “Jesus said to him, “Again it is written, ‘You shall not put the Lord your God to the

test.’”) This verse that Jesus quotes is from Deut 6:16. In this verse it refers to Israel’s testing in Massah. So what happened in Massah? We need to go to Ex. 17:1-7 to find out.

The Problem at Massah

The problem wasn’t thirst. It was a lack of faith in God that required God to prove that he cared for the people. “IF GOD REALLY CARES FOR US, THEN HE WOULD GIVE US WATER.” In the first temptation, Satan wanted Jesus to act on his own to satisfy his own needs since, he implied, God didn’t care for him. Since Jesus showed faith and testified to the faithfulness of God, Satan tempted Jesus to prove that God cared for him by putting God to the test. How many of you have been tempted in this way? IF GOD REALLY CARES FOR ME, THEN HE WOULD [fill in the blank here].

But let’s think of the two situations before us again:

Was God able to provide water? Yes, and he did. Was the Lord with them? Yes, with or without water

Was God able to catch the Lord if he threw himself down? Yes. Jesus knew that twelve legions of angels would save him from the cross if he wanted them to. But since Jesus did not do it, can we know that God was with him? Yes!

Let’s go back to our temptations to put God to the test:

The Disciples struggled with this too. In Mark 4:35-41 it says this:

35“On that day, when evening had come, he said to them, “Let us go across to the other side.” 36 And leaving the crowd, they took him with them in the boat, just as he was. And other boats were with him. 37 And a great windstorm arose, and the waves were breaking into the boat, so that the boat was already filling. 38 But he was in the stern, asleep on the cushion. And they woke him and said to him, “Teacher, do you not care that we are perishing?” 39 And he awoke and rebuked the wind and said to the sea, “Peace! Be still!” And the wind ceased, and there was a great calm. 40 He said to them, “Why are you so afraid? Have you still no faith?” 41 And they were filled with great fear and said to one another, “Who then is this, that even the wind and the sea obey him?”

Look at verse 38 again. “Do you not care that we are perishing?” Can I reword that for you?

Whatever the situation, the answer is the same. God does care for his children. If he is able to speak so that the wind and sea obey him, he is fully capable of removing your trial.

How do we overcome this temptation to test God when we doubt his care for us? Dwell on the almighty power of God. This will take your eyes off of the problem and place them on God. Notice, the fishermen were so afraid that they went into panic mode (vv. 38, 40) But when Jesus spoke and rebuked the wind and the waves, you would think they would become calm. Verse 41 says that despite the calm in the sea, they were filled with a GREAT FEAR. Their fear had moved from a fear of drowning in a storm to the fear that comes from knowing that you are in the presence of a holy God. And that is terrifying. “Sometimes the Lord calms the storm. Sometimes he lets the storm rage and calms the child.” Remember what the Bible says about God’s care for you.

Now the skeptic would say, that’s simplistic. But it’s anything but. When we are tempted to doubt God and his Word, we need to go to him and ask his help. We need to trust him to meet our needs in his way and in his time. The Israelites in Massah were unwilling to do that. They wanted water and they wanted it now! What about you? Will you learn from their mistake and follow the way of the Master in times of temptation?