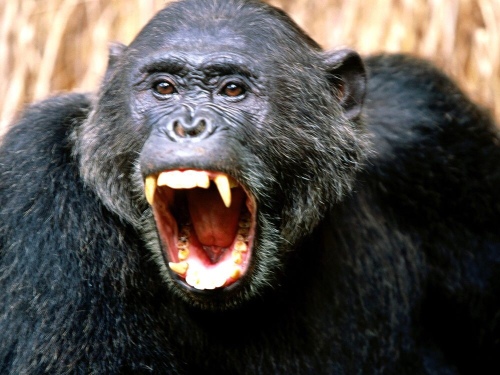 In 2009 a woman was attacked by a friend’s pet chimp in Connecticut. The chimp’s owner had raised him from infancy. He was treated as a member of the family, even eating dinner at the table, sipping wine from wine glasses and dressing himself. But, Travis the chimp wasn’t without his problems. The 200lb chimp had been disruptive, even escaping into town and avoiding police for 2 hours. The consequences were devastating. Travis May have been raised as a family member but he was by nature a wild animal.

And when we are dealing with sin, even little, so-called harmless sins, should we be surprised that when we pamper these little vipers that one-day they will rise up and fill our hearts with their venom? We are, after all, sinners we a deep, dark secret well hidden by niceness and manners. We are desperately sick with sin.

The sixth and final petition from the Lord’s Prayer addresses our needs when we face temptation and evil. Of course, we need to see the serious nature of sin before we will be driven to our knees in prayer.

Let's examine this petition in its two parts, the first being a desire to avoid temptation, and the second to beseech God’s deliverance when evil comes.

First, understand that God does not tempt anyone.

This is clear from James 1:13. The word tempt, peirasmos, can mean either “temptation” as well as ”trial” or “testing” depending upon the context.

The difference in the way that we understand it depends not only on the context, but upon the intention. A temptation is meant to destroy, while a trial or test is meant to strengthen and confirm our faith.

Second, Temptations do not come from God, but from our own hearts.

Notice too, that the lust you have is custom to your own tastes (“his own”).

Third, Satan is also a source of our temptations.

Matt 4:3 says that Satan is called “the Tempter.” Additionally, 1Peter 5:8 warns us of the danger of our enemy, therefore we are to put on the full armor of God (Eph 6:11) so that we can fend off his attacks.

Why would God do this? Because like a goldsmith purifies the gold in fire by heating it to remove the dross, so our Lord tries our faith in order for it to grow stronger and more secure.

As we all know, in this physical world trials and hard times are those times when we often grow and mature the most as people. Great men of faith were strengthened and matured through trials—think of Abraham and the sacrificing of Isaac, Moses and the exodus, David and his sin with Bathsheba, and the attempted coup of his son Absalom.

Look at 1Peter 1:6-7. From this letter written to persecuted Christian, Peter teaches us that the trials we go through are meant by God to shine forth the genuine quality of your faith, and in the end will bring glory to God.

So, why would Jesus teach us to pray that we not be lead into temptation, if there is the potential for such a great outcome?

As we depend upon God for our daily bread and our forgiveness of debts, we also depend upon our Lord for the deliverance that we need from evil. 1Cor 10:13 shows us that in every temptation, God is faithful.

We cannot overcome evil by ourselves. We cannot survive any of these trials in our own strength.

Consider the example of the Apostle Paul in 2Corinthiqna 12:7-9. Notice that the Lord allowed for this “thorn in the flesh” to be given to Paul in order to keep him humble because of the incredible insights he had into the heavenly visions described in 2Cor 12:2-4.

Now, the Lord could have removed this burden from Paul; that is why he prayed for it. But, the Lord did not. Why? Look at verse 9. To show to Paul that he needed to depend upon the Lord for his sufficient grace through this trial.

The Lord is sufficient in his grace for your every trial. God could remove every problem and trial from your life. He could remove from you every temptation and every danger—but you would no longer need his grace and power. For Paul, he learned the lesson and boasted in his weakness because through this trial the power of Christ rested upon him.

How is it that we can depend upon the Lord for our every need, including the deliverance from evil? Because His is the kingdom and the power and the glory forever. To him and him alone. We once again start where we left off—the God-centeredness of this prayer!

May we beseech our Lord that he cause us to avoid temptations, but if the trials come, we pray that he would deliver us from evil, for He, and He alone has the power to do that. Amen!