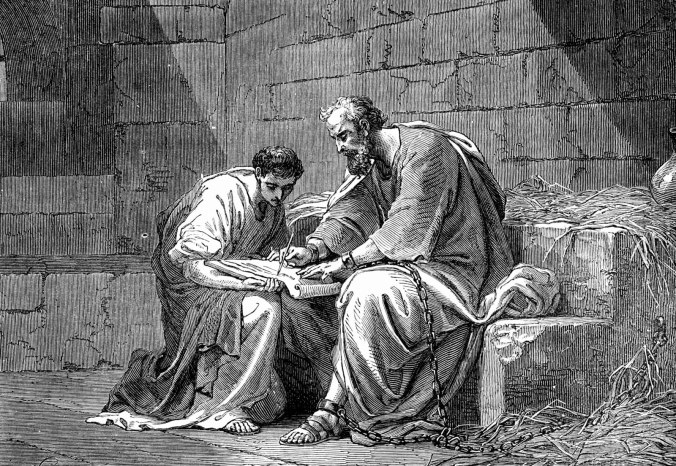 “You, however, have followed my teaching, my conduct, my aim in life, my faith, my patience, my love, my steadfastness, my persecutions and sufferings that happened to me at Antioch, at Iconium, and at Lystra—which persecutions I endured; yet from them all the Lord rescued me. Indeed, all who desire to live a godly life in Christ Jesus will be persecuted,” (2 Timothy 3:10–12, ESV)

In this “Pastor Like Paul”series we looked so far at 6 ways we need to follow (or strive to be) a godly Christian leader:

At verse 11, Paul builds upon this list with a capstone of leadership–being willing to follow Jesus in our suffering. From his prison, Paul reminds Timothy that he has followed Christ, and that Timothy and all those who would follow Jesus should also be willing to suffer as well.

But doesn’t that make Christians “lemmings?” Lemmings are small rodents that have been said to follow one another off a cliff to their deaths in some sort of weird instinct when their populations get too large. It has become a figure of speech to call people “lemmings” who thoughtlessly follow the crowd.

Interestingly, the idea of the lemmings jumping off cliffs as they follow one another is based upon a fraud. Encyclopedia Britannica reports, “For the 1958 Disney nature film White Wilderness, filmmakers eager for dramatic footage staged a lemming death plunge, pushing dozens of lemmings off a cliff while cameras were rolling. The images—shocking at the time for what they seemed to show about the cruelty of nature and shocking now for what they actually show about the cruelty of humans—convinced several generations of moviegoers that these little rodents do, in fact, possess a bizarre instinct to destroy themselves.”[1]

Why do I bring up lemmings? Because we are still talking about following the leader, and 2 Timothy 3:11-12 speak about following our leaders, both Jesus and the Apostle Paul into the very real possibility of persecution and suffering.

But just like lemmings don’t do this, neither do Christians unthinkingly thrust themselves to their deaths. We love life! But we know that this life is temporary, and that if we must risk this life to remain faithful to Christ, then the exchange is worth it.

For this post and the next in this series, we will see the need to faithfully follow Christ as Paul followed Christ, even to death if necessary. We will see this first, through the specific examples of Paul, and then through the universal principles of Scripture for all of us.

“my persecutions and sufferings that happened to me at Antioch, at Iconium, and at Lystra—which persecutions I endured; yet from them all the Lord rescued me.” (2 Timothy 3:11, ESV)

My persecutions which you saw…

It is interesting that the Apostle Paul didn’t give an exhaustive list of all the places where he had suffered persecution, nor had he given the most recent places. Instead, it appears that Paul mentioned Antioch, Iconium and Lystra because these would have been the places where Timothy first encountered the severe persecution that Paul suffered for the faith as a young boy just setting out with Paul. Timothy may have been an eyewitness to the dramatic account described in Lystra, the city he was from. He may have heard stories told of how Paul had preached to boldly and survived a brutal stoning, walking back into Lystra after being left for dead (Acts 14:20). These early accounts would have been vivid reminders that persecution was not a rare thing that happened only to a few, but that it is normal for most Christians, and that Timothy should expect it.

My persecutions which I endured…

The word for “endure” means to bear up under a burden. Paul’s body was undoubtedly covered in scars and deformities from the many hardships and persecutions he had endured for the sake of Christ.

But there was no way that the Lord would ever give Paul more of a burden than he would give him the ability to endure it. Paul’s body was a record book of his faithfulness to proclaim the gospel everywhere he went. He bore up under the burden gladly because he understood the message of the cross is life to those who would believe.

“We are afflicted in every way, but not crushed; perplexed, but not driven to despair; persecuted, but not forsaken; struck down, but not destroyed;” (2 Corinthians 4:8–9, ESV)

My persecutions which the Lord rescued me from…

Paul’s survival was attributed to the Lord alone. He didn’t give glory to God for delivering him sometimes, or even mostof the time, but “from them allthe Lord rescued me.”

This word “from” at the end of v. 11 in the ESV, is translated “out of” in the NASB and KJV. But there can be confusion when we use the words “out of” or “from” because we can understand this idea in two ways. We might mean that God rescues his children from ever having to be involved in persecution or suffering.

But we might also mean that God rescues his children when they are in the midst of persecutions and suffering. In other words, they are experiencing it, and yet God will continue to be with them and they shall be saved, but not yet.

When we look at Paul’s life, we recognize that he had both experiences, where he was delivered unharmed by his persecutors, and those where he barely made it out alive after surviving painfully through an ordeal.

Paul is imprisoned, and he does not expect that he will be released. In fact, in 2Timothy 4:6-8, Paul wrote, “For I am already being poured out as a drink offering, and the time of my departure has come. I have fought the good fight, I have finished the race, I have kept the faith. Henceforth there is laid up for me the crown of righteousness, which the Lord, the righteous judge, will award to me on that day, and not only to me but also to all who have loved his appearing.” (2 Timothy 4:6–8, ESV)

In verse 6, Paul clearly believes that he is going to be put to death, which he was. But v. 7 shows that he still has confidence in the Lord, that the Lord will carry him across the finish line of the race of faith. And then in v. 8 he envisions the awards ceremony where the crowns are given to the competitors, and Paul full expects that he and all those who trust in Christ will receive the reward of eternal life.

In those three verses we can understand what Paul was teaching Timothy in 2 Timothy 3:11, that whether it is out of the persecution or even through the persecution, the Lord will deliver him from the suffering he has faced.

Now we might read this and come to the conclusion that these things were true for the Apostle Paul, but that they may not be true for you and me. But there was a reason that Paul was telling Timothy these things. There was divine purpose in this letter.

Gordon Fee “insists that it was the Apostle’s intention to underscore that Timothy had known from his earliest days that persecution was a part of faith in Christ and that he should therefore not lose heart in his current sufferings.”[2]

Remember that Paul has mentioned the pattern from v. 10 that Timothy had followed, and Paul was commending him for this, and encouraging him to keep on going in this same direction. It is no different when we come to the matter of persecution and suffering. Timothy was to follow Paul’s example as well.

To aid him in doing this, Paul laid out three universal truths that state work together with Paul’s personal examples to show that Paul was not the exception. We will see that in tomorrow’s post.